To continue with my month-long recommendations of books written by AAPI authors, we’re going to step into the world of comics and graphic novels next.

Again, I want to state that these are my personal recommendations for books that I’ve read and loved or books that are on my TBR list. This is in no way a comprehensive list of the number of English-language published comics and graphic novels written, created, and/or illustrated by authors of Asian and Pacific Islander ancestry. This recommendation list really just scratches the surface of the treasure trove of books written and illustrated by AAPI authors.

Comics and graphic novels are book formats that I only really started exploring a few years ago. Prior to that, I don’t think I picked up even a handful of them in my tweens and teen years. What I love most about reading this format is that you are getting a sensory experience that you wouldn’t get from reading a regular book. You not only get to read intricately crafted storylines that draw you into the lives of the characters that populate them, but you also get to see them, their faces, their expressions, how they hold themselves, and a visual of the world in which these stories are set. A single panel or page of illustrations could take you to a whole other world in comics and graphic novels, and I find that amazing.

So let’s get to my recommendations! 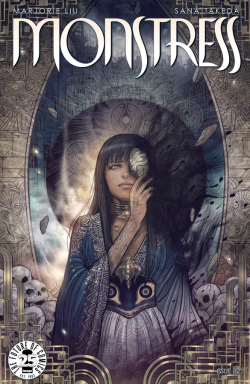 Monstress by Marjorie Liu and Sana Takeda. Monstress is one of my favourite comic series that I’ve read, ever. This dark epic fantasy is set in a matriarchal Asian-inspired world. From its storylines to its characters to its spectacular illustrations, Monstress stands apart from almost everything that I’ve come across in the genre or on the market today. The story follows Maika Halfwolf as she sets out to discover the truth behind her mother’s death, the true motives of the monster that resides within her, and her very own existence in the world. Published by Image Comics, Monstress is owned by Marjorie, a Chinese-American, and Sana who is Japanese, which is a huge deal when it comes to comics where most characters and storylines are owned by the publishers and not the writers and illustrators. Neither of these women is new to the world of comics, both have worked for Marvel on a number of different titles including Black Widow, Ms. Marvel, X-men, and Wolverine. Marjorie is also an established and best-selling romance novelist. There are two, soon to be three, collected volumes of the series that have been published. If you choose one comic to pick up and read from this list, I implore you to choose this one.

The Totally Awesome Hulk by Greg Pak. Greg is a biracial Korean-American whose career is comics’ publishing is expansive, to say the least. A number of his notable works include Kingsway West (Dark Horse), Mech Cadet Yu (Dynamite), and X-Men (Marvel). The Totally Awesome Hulk comic series centres on Amadeus Cho, one of the smartest and youngest heroes in the Marvel universe. Amadeus succeeded Bruce Banner in the role of The Hulk in 2015. The character was co-created by Greg and Takeshi Miyazawa, an Asian Canadian illustrator. Not only does an Asian American character take on one of Marvel titular characters in this series, TTAH is also one of the few Marvel titles fronted by an Asian American character. One of my favourite arcs from this series was the team up of all the Asian American superheroes team in the Marvel universe, which included Kamala Khan and Cindy Moon, Ms. Marvel and Silk respectively. That arc is featured in volume three of this series. The entire series is worth checking out and can be read in its entirety since the series ended in 2017.

Silk by Robbie Thompson. While Marvel’s Silk comic series is not written or created by an Asian American, it is heavily illustrated by a number of Asian American artists including Stacey Lee. Silk was the series that drew me into the world of reading superhero comics. It began in 2015 and ran till 2017, and centres on the Korean-American character of Cindy Moon. The same radioactive spider that had bitten Peter Parker also bit Cindy, granting her with similar spidey powers. Unlike Peter, Cindy was locked away in isolation for almost a decade before Peter Parker rescued her. The series is a favourite of mine because we not only get to see Cindy’s daily life of working as a fact checker and searching for her missing family, we also see her learning to be a superhero. It’s also one of the few series that takes a hero’s mental health into consideration. Over the entire course of the series, we get to see Cindy go to therapy to better her mental health after a decade in isolation. It’s a fantastic series and was also one of the few Marvel titles headlined by an Asian American character. 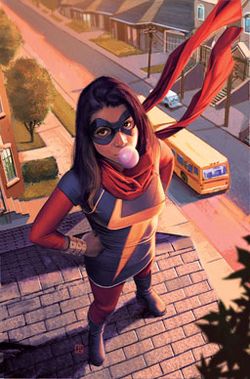 Ms. Marvel by G. Willow Wilson. Like Silk, Ms. Marvel is not written by an Asian American writer but was developed and co-created by Sana Amanat who is an Asian American and the series’ editor. The series is also illustrated by a number of Asian American illustrators including Takeshi Miyazawa. The character of Kamala Khan is a Pakistani-American teenager and is Marvel’s only Muslim superhero. Kamala received her powers after going through terrigenesis (the process individuals go through to awaken their Inhuman genes and powers). Over the course of the series, we see Kamala succeed and fail in balancing her personal life and her life as a superhero. I love this character and this series, it also one of the few remaining Asian American led titles at Marvel. There are almost a dozen collected volumes of this series and a few omnibus editions if you’re interested in reading the entire series, which I wholeheartedly recommend you, do.

Now onto the graphic novels that populate my TBR that I just haven’t had a chance to read yet.

Boxers and Saints by Gene Leun Yang. Gene is an award-winning Asian American writer and illustrator who has written and illustrated over a dozen novels and comics. He’s written for a number of different comics publishers, most recently for DC Comics where he introduced an ethnically Chinese Superman to the legendary comics franchise. Boxers and Saints is a graphic novel duology that parallels the story of a boy in China and a girl in France, centring on the conflict of the Boxer Rebellion that occurred in China in the early 20th Century.

This One Summer by Mariko Tamaki and Jillian Tamaki. This One Summer is co-created by cousins Mariko and Jillian, both award-winning Japanese-Canadians writers and illustrators. The story follows friends Rose and Windy as they go on their annual summer family trip together to Awago Beach. This year is different though, over the course of a summer, these two teens discover more about themselves and their families than they could’ve ever imagined and leave Awago Beach forever changed. This One Summer received one of Canada’s most prestigious literary awards, the Governor General Award for Children’s Illustrations. If you like This One Summer also check out Skim the first graphic novel collaboration between these two cousins.

The Best We Could Do by Thi Bui. This is an illustrated memoir from debut Vietnamese-American author Thi Bui. It is an intimate and poignant look at the struggles and triumphs of her family’s escape from Vietnam in the 1970s and their journey to the United States and the difficulty of establishing a new life in a whole new country. This graphic novel has been at the top of my TBR since it was published and I cannot wait to dive into it.

Pashmina by Nidhi Chanani. This is a debut children’s graphic novel from Indian-American author Nidhi Chanani. The story follows Priyanka Das as she searches for the truth behind her mother’s decision to leave India without Priyanka’s father. The discovery of a mysterious pashmina hidden away in a forgotten suitcase opens a door to a world she never expected one that may or may not be real. Priyanka’s journey is one of self-discovery and family, connecting two different cultures and two different worlds.

Meariki: The Quest for Truth by Helen Pearse-Otene. Meariki is a fantasy novel written by Helen Pearse-Otene, a Maori playwright, actor, and author. The story follows Meariki, a slave to the Hineamuru, the only daughter of the chief of the Ngaī Kuwai people. When a warlock abducts Hineamuru, Meariki must go on a perilous journey to save her. With each step of her journey to rescue Hineamuru, Meariki discovers that saving Hineamuru may also reveal her own destiny.

Duran, Duran, Imelda Marcos, and Me by Lorina Mapa. Duran, Duran is Filipino-Canadian Lorina’s graphic memoir. The memoir weaves together Lorina’s past and present as she returns to Manila after her father’s unexpected death. Embedded with stories of pop culture, adolescence, socio-economics, and religion, this graphic memoir is Lorina’s love letter to her family, her friends, the country of her birth, and herself.

Some other comics and graphic novels you may want to check out are:

One of my favourite Marvel superheroes returned this year with an all new run of comics. Cindy Moon, aka. Silk has been through it all and she’s back better than ever in this new run. I adored every single issue of this new run. If you’re a fan of Silk or are looking to jump into comics, Silk is a great series to start with. I’m really hoping that she gets another run with this amazing team of Maurene Goo and Takeshi Miyazawa at the helm.
This is part 2 of recommendations for books written by AAPI authors. Again, this is far from a comprehensive list-it’s just a place to help you get started.
In lieu of my #AAPI book recs blog posts, I am doing something a little more streamlined this year. These are my recommendations for books written by AAPI authors. This is by no means a comprehensive list of books written by AAPI authors, it’s just a good place to help get you started.
2020 has not been the year any of us had hoped it would be. It’s been a tough year. I want to wish you all a very happy, healthy, and safe holiday season. May the New Year bring you happiness and prosperity.
Set in the quaint British village of Wedgeford, The Duke Who Didn’t is author Courtney Milan’s latest novel. This low tension friends-to-lovers features a Chinese heroine and biracial Chinese hero. I absolutely LOVED this novel. It’s one of the best books I’ve read this year so far.
👋🏼👋🏼